If some of you are wondering what happened to your Christmas tree, perhaps this security camera photo will help you (smile). 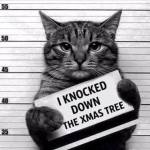 As part of our Christmas tradition, we spent a couple of days in Frankenmuth, Michigan, USA; where we visited the famous Bronner’s  Christmas store.  It is hard to explain what this huge Christmas store in like inside, but here is a photo I took.

Bronner’s Christmas Wonderland is a retail store in Frankenmuth, Michigan that promotes itself as the “World’s Largest Christmas Store”.

Designed with an Alpine architecture and operating year-round, the building is 7.35 acres in size with landscaped grounds covering 27 acres . Inside, there are approximately 800 animated figurines at various locations throughout the store.

Bronner’s parking lot can accommodate up to 1,080 cars and 50 buses. Some 100,000 lights illuminate Bronner’s half-mile long Christmas Lane in the evening. Bronner’s employs over 500 people during the holiday season. (Source: Wikipedia)

We had an unexpected surprise this Christmas, Father Billino from the Vatican, was in town.  Here is standing in front of a church with Carol.

If you live in Michigan, this is probably what your garage gym will end up looking like this winter. 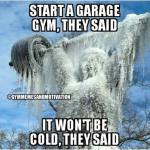 Want to know what a person values, watch how they use their time.

I think this book has something to say, but I expected more insights into the code of the samurai.

Code of the Samurai

This handbook, written after five hundred years of military rule in Japan, was composed to provide practical and moral instruction for warriors, correcting wayward tendencies and outlining the personal, social, and professional standards of conduct characteristic of Bushido, the Japanese chivalric tradition. (Source: Publisher)

Charlize Theron plays Lorraine Broughton, a top-level spy for MI6.  She is definitely the Atomic Blonde.

Was there ever a more beautiful piece of music written.  Take a moment to listen to this and you will be transported to heaven.

LAST WEEK’S POLL – Did you believe in Santa Claus when you were a child?

THIS WEEK’S POLL – How are you done?

Book binding as an art.

The book below was produced using a method that was developed during the Ming Dynasty (1368 – 1644) and remained in use until the adoption of Western binding techniques in the early 1900s.

In traditional Chinese binding, single sheets of paper are printed on one side only, and each sheet is folded in half, with the printed pages on the outside.  The book block is then sandwiched between two boards and sewn together through punched holes close to the cut edges of the folded sheets. (Source: Publisher)

A recent movie described Charles Dickens as the man who invited Christmas.

Charles John Huffam Dickens (7 February 1812 – 9 June 1870) was an English writer and social critic. He created some of the world’s best-known fictional characters and is regarded by many as the greatest novelist of the Victorian era. His works enjoyed unprecedented popularity during his lifetime, and by the 20th century critics and scholars had recognised him as a literary genius. His novels and short stories enjoy lasting popularity.

And my thanks to A, Christena,  Elia, Hollie, Jeff, Moonlight and Macaroons & Michelle, started following my blog and to Carol, Karen, Mathew, Mirian & Paula, for liking  my Harmony Books & Films Facebook page.