Since the big news recently has been the release of another Star Wars film, I thought some of you would be interested in this rare photo of the wife of one of the key characters in the Star Wars series. 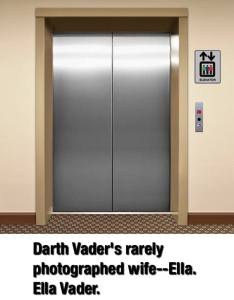 Sometimes truth is stranger than fiction and it seems the Italians have come up with outstanding security cameras.

I have the 1988 edition of this book that I first read in 1990 and it changed my understanding of the universe and I believe it will do the same for you.  There are newer versions with updates available today and as with the vast majority of my recommendations, it is a relatively easy read.

A landmark volume in science writing by one of the great minds of our time, Stephen Hawking’s book explores such profound questions as: How did the universe begin—and what made its start possible? Does time always flow forward? Is the universe unending—or are there boundaries? Are there other dimensions in space? What will happen when it all ends?

Told in language we all can understand, A Brief History of Time plunges into the exotic realms of black holes and quarks, of antimatter and “arrows of time,” of the big bang and a bigger God—where the possibilities are wondrous and unexpected. With exciting images and profound imagination, Stephen Hawking brings us closer to the ultimate secrets at the very heart of creation.  (Source: Amazon)

“Many of the truths that we cling to depend on our point of view.”

I recall watching this TV series when I was a kid and found and still find it very thought provoking.  And I have listened to all the old Dimension X, and X Minus One radio shows.  Some of those old radio shows seem a bit corny today, but not all of them.  Everything builds on what came before it, so if you like Star Wars or Star Trek, maybe you will what to check out some of this 1950s stuff.  If you look closely at one the Twilight Zone episodes, you may even see Captain James T. Kirk.

The Twilight Zone is an American television anthology series created by Rod Serling. It is a series of unrelated stories containing drama, psychological thriller, fantasy, science fiction, suspense, and/or horror, often concluding with a macabre or unexpected twist. A popular and critical success, it introduced many Americans to common science fiction and fantasy tropes. The program followed in the tradition of earlier shows such as Tales of Tomorrow (1951–53), which also dramatized the short story “What You Need”, and Science Fiction Theatre (1955–57), and radio programs such as The Weird Circle, Dimension X, and X Minus One, and the radio work of one of Serling’s inspirations, Norman Corwin.  In 2013, TV Guide ranked it #5 in its list of the 60 Greatest Dramas of All Time. (Source: Wikipedia)

Another 20% plan to lose weight by exercising

Still another 10% plan to lose weight by changing their diet.

Amazingly, almost 20% of us are pleased with our current weight–hats off to that extraordinary 20%.

Finally, 2% of us want to gain weight.  How many of us would like to trade places with that 2%.

With the release of the new Star Wars movie, this may be a bad time to ask; but which of the two series & spin offs do you prefer? 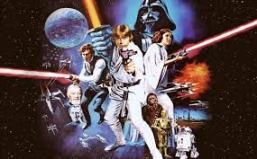 Since this week’s theme is “Science Fiction”, what better song than this one.

Since this week’s post is focusing on science fiction, here is a work of art painted by the great surrealist artist, Salvador Dalí.

The Persistence of Memory by Salvador Dalí

The well-known surrealist piece introduced the image of the soft melting pocket watch. It epitomizes Dalí’s theory of “softness” and “hardness”, which was central to his thinking at the time. As Dawn Ades wrote, “The soft watches are an unconscious symbol of the relativity of space and time, a Surrealist meditation on the collapse of our notions of a fixed cosmic order”. This interpretation suggests that Dalí was incorporating an understanding of the world introduced by Albert Einstein’s Special Theory of Relativity. Asked by Ilya Prigogine whether this was in fact the case, Dalí replied that the soft watches were not inspired by the theory of relativity, but by the surrealist perception of a Camembert melting in the sun.

The orange clock at the bottom left of the painting is covered in ants. Dalí often used ants in his paintings as a symbol of decay.

The Persistence of Memory employs “the exactitude of realist painting techniques” to depict imagery more likely to be found in dreams than in waking consciousness.[Source: Wikipedia)

Since this week’s topic is science fiction, who else but Captain James T. Kirk.

James Tiberius Kirk was born on March 22, 2233, in Riverside, Iowa. Although born on Earth, Kirk for a time lived on Tarsus IV, where he was one of nine surviving witnesses to the massacre of 4,000 colonists by Kodos the Executioner.

At Starfleet Academy, Kirk became the only student to defeat the Kobayashi Maru test, garnering a commendation for original thinking by reprogramming the computer to make the “no-win scenario” winnable.

Robert Jewett and John Shelton Lawrence’s The Myth of the American Superhero describes Kirk as “a hard-driving leader who pushes himself and his crew beyond human limits”. Terry J. Erdman and Paula M. Block, in their Star Trek 101 primer, note that while “cunning, courageous and confident”, Kirk also has a “tendency to ignore Starfleet regulations when he feels the end justifies the means”; he is “the quintessential officer, a man among men and a hero for the ages”.

Although Kirk becomes romantically involved with various women, when confronted with a choice between a woman and the Enterprise, “his ship always won”. (Source: Wikipedia)

A neutron walks into a bar and asks “how much for a beer?”

Bartender responds “For you? no charge.”

I always appreciate those that leave comments on my weekly posts, since it encourages me to continue these posts.  Thank you  Carolyn.  Leaving a comment is easy, just click on “Leave A Comment”, which is immediately below the title of this week’s post.  And if instead of seeing “Leave A Comment”, you see “# Comments”, just click on that and scroll down to leave your comment.