The Orlando Tragedy, a terrorist attack, a hate crime and the result of mental illness.

Every so often I come across ideas to improve the USA political processes and like to share those ideas with the readers of this blog.  Here is one idea that I thought was worth sharing.

Make sure you guard your health by practicing safe sex.

Know that change is inevitable, so please enjoy your family, your friends, your work and your current level of health as well as everything else.

If you want to get along with others, don’t be like this.

In my book, I advocate Journaling, because I believe it is helpful to reflect upon your past to avoid repeating mistakes.  However, you can overdo anything, including reflection.

You are never going to be extraordinary or happy, if you have a controlling personality.  Not even, if you do have a Universal Remote Control.

I just finished reading this book and I thought it has a lot of ideas if you are planning on selling, buying or even keeping your home.  I would describe it as an easy read.

I saw this movie last weekend and it is laugh out loud funny.  If you want some good entertainment, check this movie out.

There is also a bit of a message about a popular high school athlete (Kevin Hart) who befriends a bullied overweight teen (Dwayne Johnson, aka The Rock).

In addition, during the film, the Rock discloses how he built his outstanding physique.  He said, it was simple; he just did one thing.  If you want to know what that one thing the Rock did, you are going to have to watch this wonderful movie.

If you were offered a chance to reset you life:

Here is a photo I took of my wife, Carol, standing in front of the Pantheon, on one of our trips to Rome.

The Pantheon, is on the site of an earlier building commissioned by Marcus Agrippa during the reign of Augustus (27 BC – 14 AD). The present building was completed by the emperor Hadrian and probably dedicated about 126 AD.

Almost two thousand years after it was built, the Pantheon’s dome is still the world’s largest unreinforced concrete dome.

It is one of the best-preserved of all Ancient Roman buildings, in large part because it has been in continuous use throughout its history. The square in front of the Pantheon is called Piazza della Rotonda. The Pantheon, in 2013 it was visited by over 6 million people. (Source: Wikipedia)

Although Worf was raised by humans, when his parents were killed during a surprise attack by Romulans, he considered himself a Klingon at heart and studied the ways of his people. As an adult, his mannerisms and personality, as well as his innate sense of honor, became more Klingon than human.

In 2357, Worf entered Starfleet Academy. He graduated in 2361 and was commissioned with the rank of Ensign, becoming the first Klingon officer in Starfleet.  Through many brave acts and his deep sense of honor and loyalty, he rose through the ranks in Starfleet, eventually becoming Lieutenant Commander.  Later the Federation made him ambassador to the Klingon home world, Qo’noS.

And ladies, if your guy is like the above guy; than here is a role model for you. 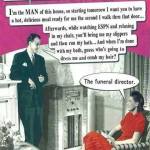 Thanks to Spiritual Journey, Elizabeth, Memangini & Samantha, for commenting on last week’s post. I urge you to let me know what you are thinking via a blog comment.

My thanks to Genie & Cats Being Cats for  following my blog (Now 70 Followers) and the 66 people who liked my Harmony Books & Films Facebook page.

If you think this blog has any merit, please pass it on to your friends.  Hopefully, more of you will continue to share this blog with others. My thanks to Carol, Susan & Joanne, for sharing my post last week on Facebook.