I guess this is one way to get into the Christmas Spirit.

But another way is to go see a live performance of A Christmas Carol.

That is what we did with some close friends and it was a wonderful experience.

Perhaps, you may want to start a Christmas tradition by getting a group of your friends to go see this play.

If you are fortunate to live near a zoo that puts on a Christmas light show, that would be another possible Christmas tradition.

We live near The Detroit Zoo, that has a fantastic Christmas light show and it is always more fun to go with friends.  I’m so glad that Dean & Linda could join us this year.

There is a tendency at this time of the year to drink and drive because of the many Christmas and New Years Eve parties.  If you drink, please consider a cab, Uber, Lift or some other way of getting around without getting behind the wheel.

On a lighter note, I thought you might enjoy the following.

If you live in the Michigan tri-county area, here is an opportunity to see male and female bench and deadlifters of all ages.  I think you will be surprised, if you haven’t seen one of these contests or haven’t seen one in a long time.

Plus, I believe you will see some national records broken.  I am going to try to break two national age/weight/type of lift records myself. 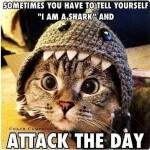 Here is a tip many of us could use to better get along with others.

Two different individuals [ ] are bound to have differences once a while. However, these differences are discussed with maturity and understanding. Respect for each other is maintained during a disagreement, and the focus is often on finding common ground or reaching a solution, rather than playing the blame game or fighting to win.

It is important that you stay up on the latest scientific discoveries.

If you want a more peaceful life, please keep this in mind.

What better time is there to read or re-read this classic.

I decided to give this film a try and really enjoyed it.  Here is a brief clip to see if you might also get a kick out of this film.

There is so much disharmony in the world and especially in the USA,

wouldn’t it be nice if everyone just stopped fighting.

LAST WEEK’S POLL – Which of the following do you think is the best chocolate bar?

THIS WEEK’S POLL – How accurate is this photo of the Corporate world?

I have been to Navy Pier in Chicago during Christmas many times  and it is always a thrill to see the Christmas Trees and Santa Clauses from various lands on display at Navy Pier.

Santa Claus, also known as Saint Nicholas, Saint Nick, Kris Kringle, Father Christmas, or simply Santa, is said to bring gifts to the homes of well-behaved (“good” or “nice”) children.  Below is a photo of Santa doing that.

The modern Santa Claus grew out of traditions surrounding the historical Saint Nicholas, a fourth-century Greek bishop and gift-giver, the British figure of Father Christmas and the Dutch figure of Sinterklaas ( also based on Saint Nicholas). Some maintain Santa Claus also absorbed elements of the Germanic god Wodan, who was associated with the pagan midwinter event of Yule.

Santa Claus is generally depicted as a portly, joyous, white-bearded man—sometimes with spectacles—wearing a red coat with white fur collar and cuffs, white-fur-cuffed red trousers, and black leather belt and boots and who carries a bag full of gifts for children. This image became popular in the United States and Canada in the 19th century due to the significant influence of the 1823 poem “A Visit from St. Nicholas” and of caricaturist and political cartoonist Thomas Nast. (Source: Wikipedia)