I attended the 2018 American Powerlifting Federation Raw Nationals last week and won a spot on Team USA for the World Powerlifting Congress world championships in November 2018. 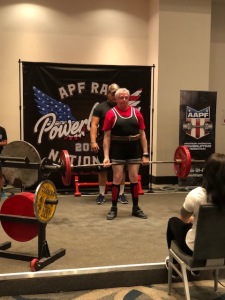 Are you eating healthy foods, controlling your weight and getting enough exercise and sleep? 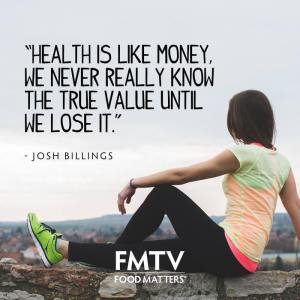 I’m an advocate for traveling and this past week I went on a safari, well at least close to a safari, I was on a pizzafari. 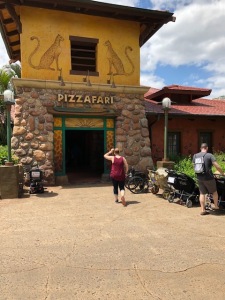 As you can see below, I encountered a dangerous animal while I was on my pizzafari.

I really like Neil deGrasse Tyson and this book is not that hard to read; but it is  hard to understand.  A lot of it is very hard to understand, but there is enough that I understood to make me glad I read it.

Astrophysics for People in a Hurry

What is the nature of space and time? How do we fit within the universe? How does the universe fit within us? There’s no better guide through these mind-expanding questions than acclaimed astrophysicist and best-selling author Neil deGrasse Tyson. (Source: Goodreads)

The week before, I tried to watch a move called, The Room; but I thought it was so bad and so amateurish that I did not want to mention it in this blog.  Well this past week, I saw The Disaster Artist, which is about the making of The Room.

I just thought it was an absolutely amazing movie and I am going to watch it again.  Perhaps, I saw a bit of myself in this film, as I have made several short films myself.

But I think I really liked the movie because it was about not giving up on your dreams and to keep trying no matter how many disappointments.  And it the end, well maybe your dream will come true, even if not in the way you intended it.

Please watch this movie and if you do, please say something in the comments about it.

When Greg Sestero, an aspiring film actor, meets the weird and mysterious Tommy Wiseau in an acting class, they form a unique friendship and travel to Hollywood to make their dreams come true. (Source: IMDB)

The real life story of writer/director Tommy Wiseau, the man behind what is often referred to as “The Citizen Kane of Bad Movies,” The Room, is brought to life, chronicling the odd film’s troubled development and eventual cult success.

Just curious, do you think today’s groups have it anything over these guys?

LAST WEEK’S POLL – Can you read this? 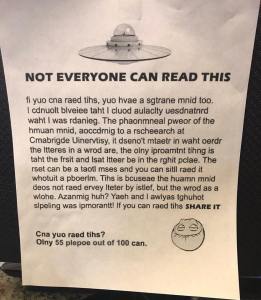 Total Votes: 16
Results sort of indicate spelling isn’t that important when it comes to what is being said, doesn’t it?

THIS WEEK’S POLL – Have you lost touch with a couple of people that you used to be?

One can make some interesting art with Tinker Toys 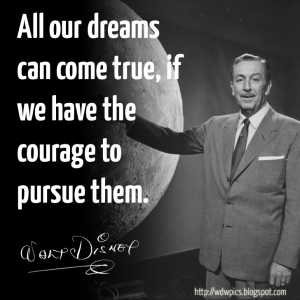 Walter Elias Disney (December 5, 1901 – December 15, 1966) As a film producer, Disney holds the record for most Academy Awards earned by an individual, having won 22 Oscars from 59 nominations. He was presented with two Golden Globe Special Achievement Awards and an Emmy Award, among other honors. Several of his films are included in the National Film Registry by the Library of Congress.

Born in Chicago in 1901. He took art classes as a boy and got a job as a commercial illustrator at the age of 18. He moved to California in the early 1920s and set up the Disney Brothers Studio with his brother Roy.

Walt developed the character Mickey Mouse in 1928, his first highly popular success; he also provided the voice for his creation in the early years. As the studio grew, Disney became more adventurous, introducing synchronized sound, full-color three-strip Technicolor, feature-length cartoons and technical developments in cameras. The results, seen in features such as Snow White and the Seven Dwarfs (1937), Pinocchio, Fantasia (both 1940), Dumbo(1941) and Bambi (1942), furthered the development of animated film. New animated and live-action films followed after World War II, including the critically successful Cinderella(1950) and Mary Poppins (1964), the latter of which received five Academy Awards.

In the 1950s, Disney expanded into the amusement park industry, and in 1955 he opened Disneyland. To fund the project he diversified into television programs, such as Walt Disney’s Disneyland and The Mickey Mouse Club.

In 1965, he began development of another theme park, Disney World, the heart of which was to be a new type of city, the “Experimental Prototype Community of Tomorrow” (EPCOT).

Disney was a heavy smoker throughout his life, and died of lung cancer in December 1966 before either the park or the EPCOT project were completed. (Source: Wikipedia)

And my thanks to higginbothampublications,  Isabelle & Shreya, who started following my blog.

And thank you Barb, Carmen, Debra, Laurie & Valerie, for sharing my FB post.