for my age/weight/type of lift 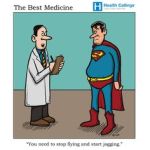 Add if you can’t jog, at least start walking and stop parking your car as close to the store entrance as possible.

Until the sun comes out again for you,

my umbrella is big enough for two.

Is your umbrella big enough for two?

I just finished reading this book again and found it fun to read and has a lot of good advice.

I hope you check out this book.

By the way, David Brown was the husband of the famous Helen Gurley Brown of Cosmopolitan fame.

You may not want to watch this if you don’t have an open mind regarding the place of humans in the cosmos.

Humans (stylised as HUM∀NS) is a science fiction television series that debuted on 14 June 2015 on. Written by the British team Sam Vincent and Jonathan Brackley, based on the award-winning Swedish science fiction drama Real Humans, the series explores the themes of artificial intelligence and robotics, focusing on the social, cultural, and psychological impact of the invention of anthropomorphic robots called “synths”. (Source Wikipedia)

I think Pachelbel’s Cannon was the greatest music ever written.  You may not want to spend the 6 minutes and 18 seconds listening to it, but if you do it will transport you to heaven.

Do you support the efforts of your friends?

How do you support the efforts of your friends?

Are you sometimes jealous of the successes and purchases of your friends?

Stonehenge is a prehistoric monument in Wiltshire, England. It consists of a ring of standing stones, with each standing stone around 13 ft. high, 6 ft. 11 in. wide and weighing around 25 tons. The stones are set within earthworks in the middle of the most dense complex of Neolithic and Bronze Age monuments in England, including several hundred burial mounds.

Archaeologists believe it was constructed from 3000 BC to 2000 BC. The surrounding circular earth bank and ditch, which constitute the earliest phase of the monument, have been dated to about 3100 BC. Radiocarbon dating suggests that the first bluestones were raised between 2400 and 2200 BC, although they may have been at the site as early as 3000 BC.

Stonehenge could have been a burial ground from its earliest beginnings. Deposits containing human bone date from as early as 3000 BC, when the ditch and bank were first dug, and continued for at least another five hundred years. (Source: Wikipedia)

Helen Gurley Brown (February 18, 1922 – August 13, 2012) was an American author, publisher, and businesswoman. She was the editor-in-chief of Cosmopolitan magazine for 32 years.

At the age of 90, Brown died at the McKeen Pavilion at New York–Presbyterian Hospital/Columbia after a brief hospitalization.

Hearst Publications said, “Helen was one of the world’s most recognized magazine editors and book authors, and a true pioneer for women in journalism – and beyond.”

Entertainment Weekly said that “Gurley Brown will be remembered for her impact on the publishing industry, her contributions to the culture at large, and sly quips like her famous line: ‘Good girls go to heaven. Bad girls go everywhere.'”

Then-New York City Mayor Michael Bloomberg in a statement said, “Today New York City lost a pioneer who reshaped not only the entire media industry, but the nation’s culture. She was a role model for the millions of women whose private thoughts, wonders and dreams she addressed so brilliantly in print.”

Brown, and her husband David, who died in 2010, were buried in late November 2012 in adjacent graves at Sisco Cemetery, her maternal family cemetery, in Carroll County, Arkansas. (Source: Wikipedia)

Also, please consider passing this blog on to others. My thanks to Carol, Darlene, Debra & Jeffery, for sharing my post last week on Facebook.

My thanks to Ogden & Rhapsody Boheme & The Godly Chic Diaries, who started following my blog and my thanks to  Eva, Mary Ann & Yvonne, who liked  my Harmony Books & Films Facebook page.