Spring time and the bunnies are helping me mow my lawn.

Quest for the Best

I had the privilege of meeting Stanley Marcus October 13, 1992 and he signed his book for me. Although I was only with him a minute or so, I walked away knowing I had just met someone who was truly extraordinary. As for the book, Stanley Marcus wrote it, so the book has to be remarkable. I’ve read it and reviewed it a number of times over the last quarter century that I have had it.

Who better to know what is “the best” than the man who made Neiman Marcus synonymous with excellence for more than fifty years? Quest for the Best outlines Marcus’s philosophy of what constitutes the best in goods and services and how to receive it.

Marcus describes how increased labor costs and the disappearance of family owned businesses into the pockets of corporate giants have led to an institutionalized indifference to quality. “I have observed,” he writes, “that when you talk with an independent fine-quality maker, he speaks with pride about his product; when you talk with the chairman of a large corporation, he refers with pride to its net profit and balance sheet.”

Quest for the Best is not just a nostalgic look, however, at the age of handcrafted elegance. Marcus gives good advice on how consumers can educate themselves about the best, demand it, and get it. He describes his own experiences with the best in chapters such as “The Things You Love to Touch,” and “Bed and Board.” Witty, urbane, but always accessible, Marcus is a joy to read.

PLAY & MOVIE OF THE WEEK

I saw this play on April 28 at Meadow Brook Theater, in Rochester, Michigan; and I thought it was excellent. I didn’t look at my watch even once, the time just flew by with some comedy and a lot of great songs.

This hit takes you to the 1958 Springfield High School prom where we meet four girls with hopes and dreams as big as their crinoline skirts! As we learn about their lives, the girls serenade us with classic ‘50s hits including “Lollipop,” “Dream Lover,” and “Stupid Cupid.” When the girls reunite to take the stage and perform at their ten-year reunion we learn about the past decade’s highs and lows.

It has taken me a while to get around to watching this film. I found it well worth watching and the acting was superb.

Given the movie of the week, it seems appropriate to feature some music by Queen.

We Will Rock You

This week I wanted to provide a bird’s-eye view of Niagara Falls; however, Bird photo bombed my shot of the Falls. 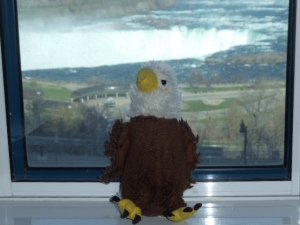 During his tenure at the company, he also became a published author, writing his memoir Minding the Store and also a regular column in The Dallas Morning News.

Marcus introduced many of the innovations for which Neiman-Marcus became known, creating a national award for service in fashion and hosting art exhibitions in the store itself, as well as weekly fashion shows and an annual Fortnight event highlighting a different foreign country for two weeks each year.

He established the Neiman-Marcus Christmas Catalogue, which became famous for extravagant “His and Hers” gifts such as airplanes and camels. Marcus prided himself on his staff’s ability to provide service and value for each client, often citing his father’s dictum, “There is never a good sale for Neiman Marcus unless it’s a good buy for the customer.”

There are so many mysteries is the world, with the help of numerous friends, this blog is trying to give you a greater understanding of the world we live in.

I’m getting the impression that the majority of American colleges and universities are at best trade school and for many not even that.

Guys, here is some advice on how to flirt with girls.

Regarding the film “My Cousin Vinny”:

Females, have you ever lifted weights?

Total Votes: 14
Males, have you ever lifted weights?

Do you make enough time to create the life you want?

Total Votes: 17
Did the above instructions on how to fold a fitted sheet help you?