This Week’s Post Is Coming To You From The Following Polish Cities: 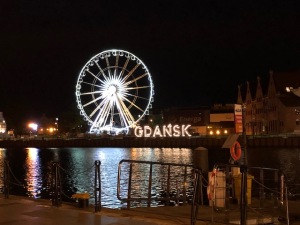 (Famous for its Gnomes) 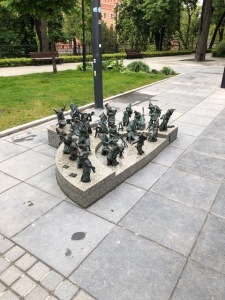 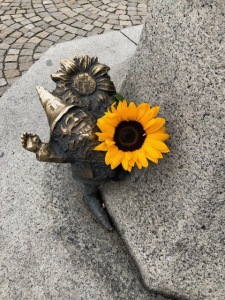 Last week I mentioned a book titled The Second Triumvirate by Clifford Alexander. I liked the book so much and I obtained and read this book. 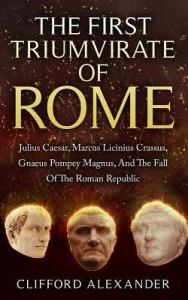 The First Century BC was a century characterized by warfare and political strife in Rome, and was beginning to undergo an uneasy transition from Republic to Imperial Power.

Central in this change were the actions of the First Triumvirate: an alliance between the most powerful men in Rome. The Triumvirate was composed of Gnaeus Pompey Magnus, Marcus Licinius Crassus, and Gaius Julius Caesar, and together these individuals combined their vast political influence to reduce the Roman Senate to a mere charade.

Soon, it too began to show signs of corruption, and each man started to suspect the other of looming betrayal. These misgivings would seep through the alliance until the poison had successfully turned the members of the First Triumvirate against one another. The political tension, and the ensuing war, would fundamentally alter the very fabric of the Roman state forever. From the chaos of the Triumvirate, a new form of government would take root: the Roman monarchy we now know as the Empire.

I watched a couple of movies this week, but I don’t want to mention what they were because I am afraid you might simply take a look at them out of curiosity. Trust me, the majority of you will be disappointed. I was crossing the Atlantic Ocean and could not sleep; which is the only reason I watched them.

If you have a movie suggestion, please mention it in the comment section of this blog.

If you have never been exposed to classical music, you should give it a try.

Kensho Watanabe was the conductor and what an amazing performance he put on.

We got there early and was able to sit in the first row. When Kensho walked by us he said, “You guys are really close.” I thought that was cool, first time a conductor ever spoke to us.

After intermission, Kensho came by again and said, “Thank you for staying.” I thought he was really cool.

The focal point of Długi Targ, the Long Market, is the Neptune Fountain, a bronze statue of the sea god erected in 1549 and converted to a fountain in 1633 and restored in 2011/12.

During WWII, this symbol of Gdańsk was dismantled and hidden with many of the city’s other treasures. It was only returned to its rightful place in 1954.

Lech Wałęsa (Born 29 September 1943) is a Polish retired politician and labour activist. He co-founded and headed Solidarity, the Soviet bloc’s first independent trade union, won the Nobel Peace Prize in 1983, and served as President of Poland from 1990 to 1995.

While working at the Lenin Shipyard (now Gdańsk Shipyard), Wałęsa, an electrician, became a trade-union activist, for which he was persecuted by the Communist authorities, placed under surveillance, fired in 1976, and arrested several times. In August 1980 he was instrumental in political negotiations that led to the ground-breaking Gdańsk Agreement between striking workers and the government. He co-founded the Solidarity trade-union movement.

After martial law was imposed in Poland and Solidarity was outlawed, Wałęsa was again arrested. Released from custody, he continued his activism and was prominent in the establishment of the 1989 Round Table Agreement that led to semi-free parliamentary elections in June 1989 and to a Solidarity-led government.

In the Polish general election of 1990, Wałęsa successfully ran for the newly re-established office of President of Poland. He presided over Poland’s transition from communism to a post-communist state.

I was at the Gdañsk Shipyards and took this photo. 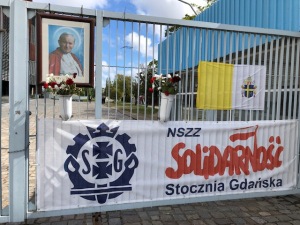 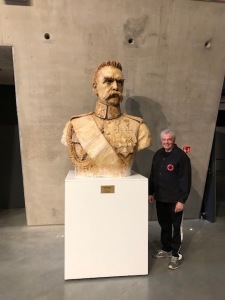 Last week I mentioned that Józef Pitsudski, the great Polish patriot, was more of a “My Way Or Prison” type guy than a “My Way Or The Highway” type guys.

Here I am in prision.

I am actually going to be lifting in the AWPC world powerlifting championships on my birthday, August 16. And on my birthday, I am going to try in my “Age/Weight” category to win the raw bench press & raw deadlift championships, plus break the current AWPC world’s raw deadlift record. The record is currently held by a Russian, who set it in Moscow on June 15, 2013. It will be a nice birthday present for a 73 year-old. 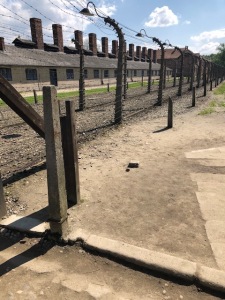 I was at this horrible place, but did not what to take many pictures. The camp commandants were publicly hung, but I was told the guards were typically given one to three years prison. I think they should have all been hung.

I was just following orders is never an excuse. 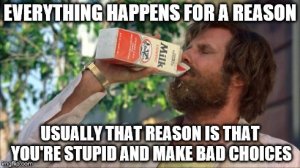 Have you ever been to Poland?

For people who are at least 50% Polish, have you ever been to Poland?

Have you been guilty of rescuing someone who consistently makes poor choices?

Total Votes: 17
If you have or are continuing to rescue someone who consistently makes poor choices, are you going to stop?

Are you holding on to anger?

Total Votes: 17
If you are holding on to anger, are you going to let it go?