I understand that the Chinese have a saying, white shirts and politicians are best when new.

If you look at how long so many of our key political leaders have held office, do you ever wonder if they are going to fix something, why didn’t they fix it decades ago.

I believe there are no people without flaws, Jefferson had great flaws but he also did great things. There is much more to Thomas Jefferson than you are likely to hear from the media or even today’s schools. 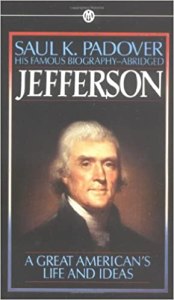 An abridged version of the classic biography of the U.S. President Thomas Jefferson.

This is a stirring portrait of an extraordinary American—Thomas Jefferson—third President of the United States, architect of freedom and democracy. He began his remarkable career as a lawyer, served in the Virginia House of Delegates and subsequently became Governor of Virginia, Ambassador to France, Secretary of State, and President.

He wrote his own epitaph, because he hoped to be remembered for three of his contributions to the American nation—author of the Declaration of Independence and the Statute of Virginia for Religious Freedom—and Father of the University of Virginia. Yet, curiously enough, most of Jefferson’s life was a struggle between his desire for a quiet, scholarly life on his plantation at Monticello and the sacrifices he had to make in order to serve his county.

Here, Professor Samuel K. Padover deftly reveals the personality of Jefferson, the devoted husbabnd and father, the farmer and philosopher, as well as the crises and achievements of his brilliant career as a statesman, in this absorbing, highly readable book.

Dancing With The Tsars

If you enjoy Dancing With The Stars, perhaps you will enjoy this show.

I bought this hanging decoration in 2017 from one of the Indians on the floating islands. They, like everyone I saw in Peru; absolutely refused to accept handouts. They want you to buy something from them, not give them something for nothing.

I found the character of the Peruvians more impressive than so many in the USA, who want something for nothing.

From his debut, Callahan became the template for a new kind of cop: an antihero who does not hesitate to cross professional boundaries in pursuit of his own vision of justice, especially when the law is poorly served by an inept, incompetent bureaucracy.

All of the Dirty Harry films feature Callahan killing criminals, mostly in gunfights. Phrases he utters in armed stand-offs, “Go ahead, make my day” and “[…] you’ve got to ask yourself one question: ‘Do I feel lucky?’ Well, do ya, punk?” have become iconic.

This Week’s Joke Compliments of the BBC

I was told the BBC was trying to be sarcastic.

It seems everyone has to adapt to our new environment.

Gyms have been closed since mid-March and yet Michigan’s governor has now permitted Detroit’s casinos to be open. I have to wonder about the governor’s motivations, not to mention encouraging nursing homes to take in Coronavirus patients. 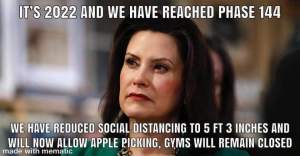